Posted on February 4, 2014 by Center for Ethics and Humanities in the Life Sciences

In December 2013 the Michigan legislature passed the Abortion Insurance Opt-Out Act. Because of the Act’s origin as a petition to initiate legislation, the governor possessed no power to veto it. Thus, effective March 14, no health insurance plan offered for sale in Michigan may include coverage for “elective abortion.” Instead, consumers desiring such coverage must purchase an additional rider – before becoming pregnant. No insurance carrier is obligated to sell such a rider, nor is any employer-based insurance plan required to offer employees an opportunity to purchase one.

The outcry against the law has condemned the allegedly undemocratic process of its enactment, the predicted effect on access to abortion for Michigan women, and possible further restrictions on abortion rights. Less attention has been paid to potential challenges to the law, the use of extreme spin on both sides, and the role of abortion restrictions in the larger context of Reproductive Justice.

Can it be undone?

The ACLU of Michigan at one point considered sponsoring a ballot initiative with the objective of overturning the rider law. Would it succeed? Although most Americans favor abortion rights to some extent, this support might not translate into overturning insurance coverage restrictions. Voters might find themselves weary of thinking about health insurance, erroneously believe that their tax dollars are funding abortion services, or simply experience the connection between insurance coverage and abortion rights as too tenuous to follow.

A second option is a court challenge. Abortion rider laws in a number of other states provide a basis for comparison. The outcome of ACLU v. Praeger, however, suggests that a federal court is unlikely to declare the Michigan law unconstitutional. In Praeger, a Kansas federal district court employed a two-part test: a state abortion statute could be found unconstitutional only if it were shown both that the effect of the statute was to create an “undue burden” or “substantial obstacle” on a woman’s right to seek an abortion and that the state legislature had intended to create this effect. The effect prong of the test was successful in Kansas, as it might also be in Michigan, but the intent prong could not be proved. Consequently, the motion in question was dismissed and the ACLU did not appeal. A Michigan challenge would be similarly hard-pressed to show legislative intent; it would require testimony or other legislative history containing statements that the legislation was intended to curtail abortion access – a difficult task, when the law’s promoters have insisted it concerns disposition of Michigan taxpayer dollars. In addition, the long history of the Hyde Amendment, which forbids the use of federal funding for abortion services, together with provisions of the Affordable Care Act, including the Nelson Amendment, support the segregation of abortion funding in insurance plans, making an undue burden finding that much more improbable.

The logic of segregating funding for abortion services outside private insurance plans purchased – in some cases – with the ACA’s tax credits is that no one’s tax dollars should pay for services rendered to other citizens if one disapproves of those services for moral or religious reasons. This extreme “not with my money” spin ignores both the inherent rationale behind group insurance plans – risk pooling – and the nature of a system of taxation. A nation cannot accommodate every citizen’s competing moral priorities within the tax system. For example, a Jehovah’s Witness (let’s call her JW) who has a religious objection to blood transfusions nevertheless indirectly contributes tax dollars to their provision; after all, the hospital where JW has a broken bone set offers transfusions to its other patients. To the extent that JW’s insurance payment enables the hospital to pay its electric bill and staff its Emergency Room, JW is indirectly subsidizing blood transfusions. To try to arrange it otherwise would be extreme indeed!

Furthermore, by asserting a breach between religious people opposing abortion and non-religious condoning it, supporters of the rider law not only disregard many faith traditions or personal moral stances that do not object to abortion, but also run afoul of the First Amendment, which forbids the establishment of a state religion and guarantees free exercise of an individual’s religion. New legal scholarship on the ACA contraception coverage mandate suggests that an employer’s refusal to provide these benefits shifts costs to the patient-employee, effectively forcing the patient-employee to subsidize the employer’s practice of religion. The same could be said of shifting abortion costs to individuals.

Opponents of the rider law, for their part, have also resorted to extreme language. Because the law does not provide an exception for pregnancies resulting from rape, opponents refer to the rider as “rape insurance.” However valid this point, and however courageous and moving the public accounts by rape survivors, this characterization nevertheless erects a straw man that is easily knocked down: it implies that pregnancies caused by rape are responsible for a greater percentage of abortions than is actually the case. More importantly, though, it suggests that an unwanted pregnancy is not sufficient reason in and of itself for a woman to seek an abortion. The extreme language serves only to limit permissible abortions to circumstances that the law’s proponents acknowledge to be extreme. This contrasts sharply with current reality of how many women seek abortions and their reasons for doing so.

If opponents to the abortion rider law seek a slogan that validates abortion rights in all situations, they might be better served by this classic:

Reproductive Justice is about more than abortion

The Reproductive Justice movement, founded by women of color in the 1990s, emerged as a reaction to earlier advocates’ focus on abortion to the exclusion of other reproductive rights. Many American women have experienced class- and race-based attacks on reproductive rights unrelated to abortion. These include:

Reproductive Justice’s embrace of a broad spectrum of issues invites exploration of the intersectionality of various reproductive rights and identities. Lynn Paltrow, director of National Advocates for Pregnant Women, speaks of valuing the lives of the unborn, but also the lives of the women who give birth to them, the lives of the children these women already have, as well as the other obligations women bear to their family members and their communities. Paltrow calls this view “pro-lives.” 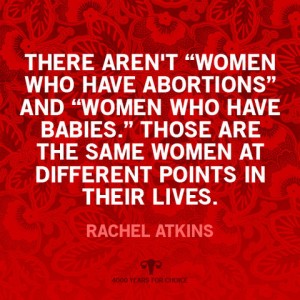 A key understanding that flows from the pro-lives viewpoint is that restrictions on abortion are based on the same beliefs that lead to restrictions on pregnancy, childbirth, and parenting. Because of the inherent conflict in granting rights to a fetus when it is inside a woman’s body, even women who identify as pro-life may find themselves undergoing court-ordered c-sections, accused of murder when they experience stillbirth, or denied access to respectful, evidence-based maternity care. The sharp distinction between pro-life and pro-choice ideologies begins to blur.

Portraying the abortion rider law in the direst of terms convinces no one to switch sides. Rather, Michigan voters must be shown that these coverage limitations will not only lead to terrible financial hardship for individual families, but also act as a precedent for singling out other expensive, controversial, or merely inconvenient procedures that insurers and employers will be only too relieved to exclude from coverage. Such omissions will not injure families equally, of course; those possessing the fewest options will suffer the most. People who oppose abortion rights may wish to consider whether it is moral to build policy on the backs of the least fortunate.

Finally, medical, policy, and political allies in the struggle for abortion rights, who have long trusted women to make decisions about ending pregnancies, can help now by trusting women to do the same for all aspects of their reproductive lives. The women who want ten children, or want no children, or who raise children in poverty, or who wish to achieve a vaginal birth after a previous c-section, or to forego continual electronic fetal monitoring, or to give birth at home attended by licensed midwives – these women and their families also need allies to protect their reproductive rights. Not only would support for these other rights be consistent with support for abortion rights, but it would also serve to unite individuals across the pro-choice/pro-life chasm, freeing those communities to move forward together to tackle the larger problems of poverty and inequality that affect families’ reproductive lives – and so much more.

Bridges, Khiara. Reproducing Race: An Ethnography of Pregnancy as a Site of Racialization. University of California Press, 2011. http://www.ucpress.edu/book.php?isbn=9780520268951.

Flavin, Jeanne, and Lynne Paltrow. “Toward a ‘Pro Lives’ Perspective That Values the Lives of Pregnant Women and the Well-Being of Our Nation.” Mobilizing Ideas, March 18, 2013. http://mobilizingideas.wordpress.com/2013/03/18/toward-a-pro-lives-perspective-that-values-the-lives-of-pregnant-women-and-the-well-being-of-our-nation/.

Deborah Fisch, J.D., is affiliated with the University of Michigan Program for Sexual Rights and Reproductive Justice, the Human Rights in Childbirth Legal Defense Network, and Legal Advocates for Birth Options and Rights (LABOR). Her professional interests include the role of malpractice liability in determination of standard of care; the legal maternal-fetal relationship in pregnancy, labor and childbirth; regulation of out-of-hospital birth attendants and protocols for their interaction with in-hospital providers; and evolving access to maternity care under the ACA. She actively advocates for licensure of Certified Professional Midwives in Michigan. She earned her AB in Linguistics from the University of Michigan and her JD from Wayne State University Law School. Visit her new blog, Mama’s Got A Plan: Maternity Care, Health Insurance, and Reproductive Justice.

Join the discussion! Your comments and responses to this commentary are welcomed. The author will respond to all comments made by Tuesday, February 18, 2014. With your participation, we hope to create discussions rich with insights from diverse perspectives.

About Center for Ethics and Humanities in the Life Sciences

Devoted to understanding and teaching the ethical, social and humanistic dimensions of illness and health care since 1977.
View all posts by Center for Ethics and Humanities in the Life Sciences →
This entry was posted in Bioethics in the News and tagged abortion, abortion rider law, abortion rights, bioethics, Deborah Fisch, health care, insurance, Michigan, pregnancy, pro-lives, reproductive justice, rider, women's reproductive rights. Bookmark the permalink.